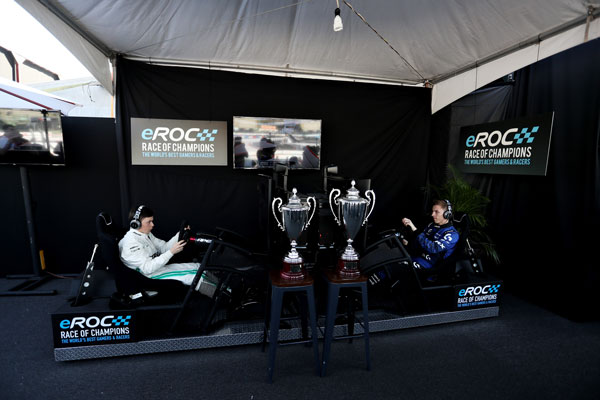 Race Of Champions continues its tradition of arranging virtual car races in esport format in parallel with the real competitions also in 2022. A game simulator has been designed to mimic the real track on ice and snow outside Pite Havsbad and from Thursday 13 January players and " simracers” from around the world the opportunity to qualify for the eROC.

While the world competitions that will take place on snow and ice at Pite Havsbad 5-6 February are being prepared in the best possible way, the launch of this year's edition of eROC - a racing game for e-sports is also underway. A game simulator with several courses, of which a new one that mimics Piteå's course on the frozen sea has been constructed and is now released on an open platform where e-sportsmen from all over the world can compete against each other.

eROC was first introduced during the Race Of Champions in 2018 in Riyadh and simracing, which is a major e-sport around the world, is more like real racing than many people think. The organizers behind Race Of Champions have taken the step further and also give the world's best e-sportsmen an opportunity to qualify for the real races on site in Piteå.

– In addition to the e-sports competing against each other on their virtual platform, we give the absolute best players in the world the opportunity to qualify for the real competitions and test the physical racing world, says Fredrik Johnsson, President Race Of Champions and continues.

– It will be really exciting to see how the players cope with the challenge of driving the new course in the ROC Snow + Ice simulator. We have created a completely different level of grip that will resemble driving on ice and snow. Then it will be extremely interesting to see which of the e-sports takes home eROC and follow how you then manage real racing on the frozen sea.

– It's cool that the best players in e-sports and virtual racing can challenge some of the world's best drivers on the frozen sea here at Pite Havsbad, says Tobias Lindfors, CEO and owner of Pite Havsbad Group, who believes that the e-sports venture is a fun parallel event to the real competition.

The winner of the eROC thus wins a place in the physical Race Of Champions and thus gets the opportunity to stand in the real starting field and compete against some of the world's best drivers in motorsport. E-sportsman and simracer Enzo Bonito actually won his heat in a real race car against Formula E world champion Lucas Di Grassi during the Race Of Champions physical competitions in Mexico 2019.

– The level of simracing has definitely risen in the last two years. Race Of Champions is one of my favorite competitions, now I just need to move on in the qualifiers and secure a place in the final, says the two-time eROC champion James Baldwin.

The public is invited
In addition to the qualifiers for the pros, the general public will also be able to compete for a place in the e-sports competition eROC 2022 where the winner, together with the best Swedish participant, will receive a trip with all costs paid and a place in the eROC final. The final of the eROC will be decided on February 3, where a total of 4 finalists will compete against each other to take home the title and be allowed to drive on the frozen sea at Pite Havsbad against some of the world's best drivers. Organizers have already confirmed a list of world drivers from around the world of motorsport, including Formula1, Le Mans, NASCAR, the FIA ​​World Rally Championship and the Indy 500.

From Thursday 13 January, the public can register on the Race Of Champions website to participate in the four qualifying competitions that take place on 14, 16, 18 and 20 January, and where the winners advance to the final qualifiers on 27 January 2022. The only requirement to participate in the eROC competition is a download of the Assetto Corsa.