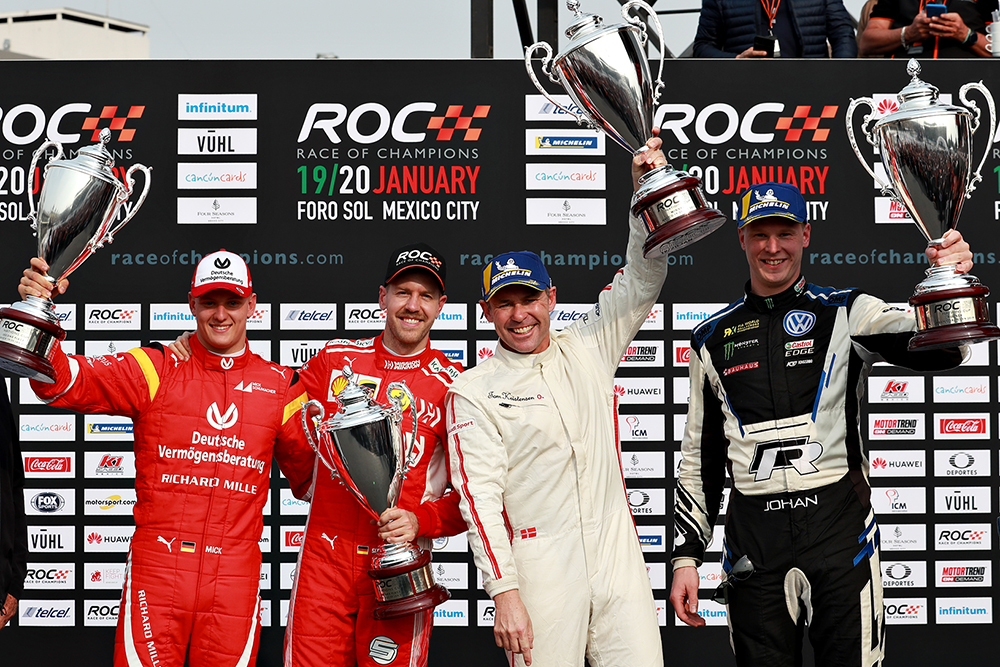 February 11, 2021 – Promoters of the annual Race Of Champions (ROC), International Media Productions (IMP), announced today the first group of drivers confirmed for the 2022 event, including some of the biggest stars from the Nordic countries who will be contending for the ROC Nations Cup as well as the individual title: ROC's coveted "Champion of Champions". Petter Solberg and his son Oliver Solberg will represent Team Norway, while Denmark’s Tom Kristensen and Sweden’s Johan Kristoffersson, will partner as Team Nordic and will look to defend the ROC Nations Cup title that the duo captured at ROC Mexico 2019.

Introduced in 1999, the ROC Nations Cup has become a favorite of drivers and audiences alike. Staged on the first day of competition, this unique team event has produced some of ROC's most memorable rivalries and dynasties. Multiple Formula 1 World Champions, Michael Schumacher and Sebastian Vettel, gave Germany six straight wins in the ROC Nations Cup from 2007-2012, with Vettel going on to win the main event again in 2015 and take 2nd place with Michael’s son Mick Schumacher in the Nations Cup in Mexico 2019. "ROC Nations Cup at Wembley Stadium was my first big moment at Race Of Champions," said Vettel. "It was 2007, I was a young driver and teamed up with Michael. I saved the day, and it was the beginning of a great friendship with Michael and now his son Mick. We have had a lot of good times at ROC.”

The 2022 event in Pite Havsbad will mark the 16th appearance of Tom Kristensen at the Race Of Champions, beating Swedish World Rally Champion Stig Blomqvist’s record of 15 ROC appearances. Kristensen, a 9-time winner of the 24 Hours of Le Mans, has captured the ROC Nations Cup trophy three times and has made it to five individual finals, but has yet to top the podium and claim the Champion of Champions trophy. "ROC is a special event," said Kristensen. "It is a fun event. As a driver, it is very competitive and it draws you in. You line up against champions from very different disciplines and championship series, and each track has its own challenges. I have competed in ROC all over the world including on the gravel in Gran Canaria and asphalt at iconic stadiums like the Bird’s Nest in Beijing and Wembley Stadium in London. Surely the ice and snow will suit the rally guys, but the track will be very fast, and I like that."

Kristensen's teammate, Johan Kristoffersson, secured his third FIA World Rallycross title in 2020 and has recently signed on with Rosberg Xtreme Racing to campaign in the Extreme E series. Kristoffersson was on hand to test the ROC Rallycross Lite car on a prototype track in Pite Havsbad in January, bringing his experience from a career in rally, rallycross, supercar and touring car competition. "This course on the ice is so much fun to drive," said Kristoffersson. "I am sure the final track design will be even faster and will put big demands on car control. It is very different than the stadium racing in the past. Race Of Champions is the coolest event and I really look forward to compete against some of the world’s best drivers here at home in Sweden".

Another ROC veteran, FIA World Rally and World Rallycross Champion, Petter Solberg, has confirmed his return to join his son and rising World Rally Championship star, Oliver Solberg. Family Solberg will represent Norway in the ROC Nations Cup. The father and son team took on last year’s Virtual Race of Champions, held under COVID restrictions, where they made semi-finals. "We are looking forward to getting back into real cars and racing on the ice," said Solberg Sr. "I've seen the footage from testing, the track and the setting look great. We look forward to knowing more about the equipment for this event. The move to include electric cars will be a big development for ROC, and also could be a challenge for some drivers."

19-year-old Oliver Solberg is one of the most exciting young drivers in the World Rally Championship, where he competes under a Swedish licence. “I am both Swedish and Norwegian” explained Oliver, whose Swedish mother Pernilla Solberg is part of the famous Walfridsson motorsport dynasty. “I had a lot fun competing with my dad in the Virtual Race Of Champions as Team Norway, and I can’t wait to do it in the real event. That it will be on snow and ice makes it even more exciting. I have been getting some practice in already for the WRC event in Finland, which will come in handy for the Race Of Champions.”

The final driver line-up will be announced in the lead up to the event, but Race Of Champions is renowned for attracting superstars from all of the premier leagues in global motorsports including Formula 1, Le Mans, Nascar, IndyCar, World Rally and Rallycross. Over its three decades, the event has been a battleground for European legends like Michael Schumacher, Tom Kristensen, Sebastian Vettel, Sébastien Loeb, Petter Solberg, Mattias Ekström, Colin McRae, David Coulthard, Marcus Grönholm, and Jenson Button; along with other international stars like Nascar champions Jimmie Johnson, Kurt and Kyle Busch, and Jeff Gordon; Ryan Hunter-Reay and Josef Newgarden of IndyCar; Formula E Champion Lucas Di Grassi; Legendary Extreme sports star Travis Pastrana; and Indy 500 champs Helio Castroneves and Juan-Pablo Montoya.

"There will be strong rivalries between the Nordic Countries, with drivers from Finland and Sweden along with others from around the world to be announced in the lead-up to the event," said ROC President, Fredrik Johnsson. “To have 16 of the world’s best drivers like Tom Kristensen, Johan Kristoffersson, Petter and Oliver Solberg, compete here on the frozen ocean is unique in the world. The reactions are fantastic,” said Tobias Lindfors, Chairman and owner of Pite Havsbad Group.

The event will take place at beginning of 2022, with the exact date to be announced in the coming month. The organizers expect to be able to have live attendance, but have a plan in place to be able to organize the event even if the COVID restrictions persist. Organizers and local officials will be providing updates through 2021 (visit raceofchampions.com) with regard to any restrictions affecting travel and local services due to COVID, as well as updates regarding any permitted live attendance and ticket sales.

During its three decades, the event has been a competition arena for European legends such as Michael Schumacher, Tom Kristensen, Sebastian Vettel, Sébastien Loeb, Petter Solberg, Mattias Ekström, Colin McRae, David Coulthard, Marcus Grönholm and Jenson Button; along with other international champions such as Jimmie Johnson, Kurt and Kyle Busch and Jeff Gordon of NASCAR; Ryan Hunter-Reay and Josef Newgarden of IndyCar; Travis Pastrana from the X Games and Indy 500 champions Ryan Hunter-Reay, Juan-Pablo Montoya and Helio Castroneves.

About Pite Havsbad:
Pite Havsbad is northern Europe's largest facility for tourism and conferences. Whether you are looking for relaxation, entertainment, activities, enjoyment or rewarding meetings, you will find the opportunities here year round.