Race Of Champions to hold world final event by the arctic circle in Pite Havsbad, Sweden in January 2022 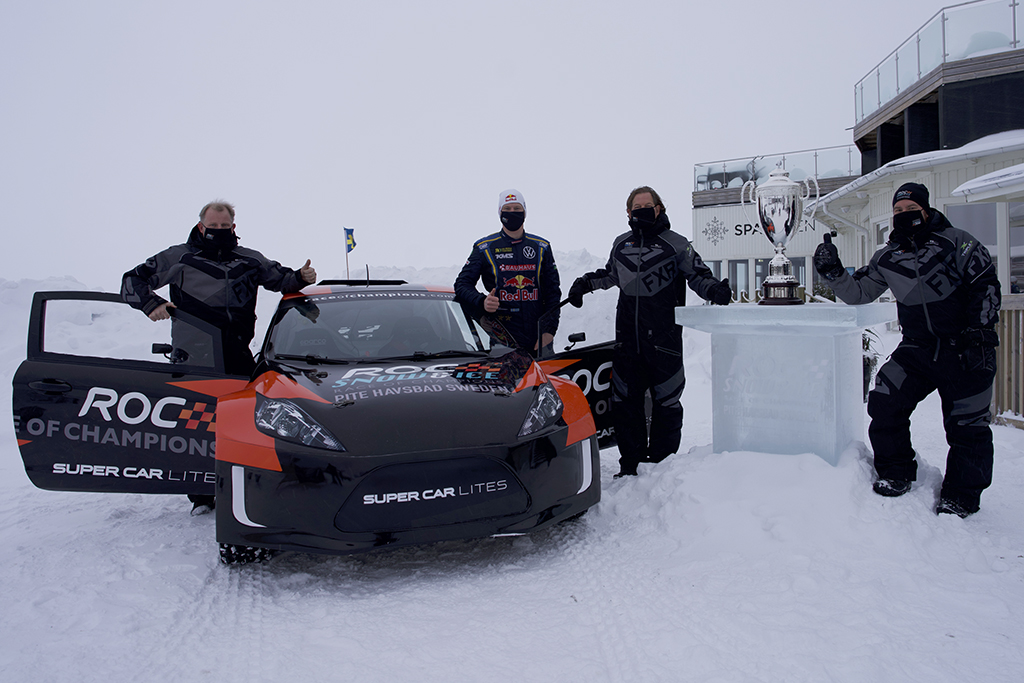 January 21, 2021 – International Media Productions (IMP) announced today the first Race Of Champions (ROC) event ever to be held in Scandinavia. The rare challenge will feature many of the world's most celebrated race car drivers and a specially-designed circuit built on the frozen Baltic Sea at Pite Havsbad just 60 miles from the Arctic Circle.

“After organizing the Race Of Champions in some of the most prestigious venues like the Bird’s Nest Olympic Stadium in Beijing, Stade de France in Paris, Wembley Stadium and London’s Olympic Stadium it is a huge honour to be able to bring our event to my home country Sweden for the first time" said Race Of Champions President and co-founder, Fredrik Johnsson. "At ROC we are always looking for ways to put new exciting tests in front of some of the world’s top race drivers. In the past, that might have been a very tight track inside a stadium, but this time we will be able to build a longer, wider more spectacular track. The event will be unlike anything we are used to seeing and be one of the ultimate tests of a driver's car control."

“After the event we will keep the Race Of Champions track open until end of each winter season for unique ROC Driving experiences for both corporate and private clients developed in a long-term partnership with Pite Havsbad Group” continues Fredrik Johnsson.

“Race Of Champions at Pite Havsbad will be the largest event that has been held in Norrbotten and it is very gratifying that it brings many new jobs in the long term," says Björn O Nilsson, Governor of Norrbotten, the largest and northern-most region of Sweden.

“We are very happy that we have signed a long-term agreement to annually host the only snow and ice Race Of Champions event and the only event in the Nordics. This unique event where some of the world's best drivers will drive on the frozen sea and where the entire event competition, activities, entertainment, restaurants and accommodation will take place at Pite Havsbad. This event will be a big boost for winter tourism in Sweden and the region" says Tobias Lindfors, chairman and owner of Pite Havsbad Group.

The final driver line-up will be announced in the lead up to the event, but Race Of Champions is renowned for attracting superstars from all of the premier leagues in global motorsports including Formula 1, Le Mans, Nascar, IndyCar, World Rally and Rallycross. Over its three decades, the event has been a battleground for European legends like Michael Schumacher, Tom Kristensen, Sebastian Vettel, Sébastien Loeb, Petter Solberg, Mattias Ekström, Colin McRae, David Coulthard, Marcus Grönholm, and Jenson Button; along with other international champions like Jimmie Johnson, Kurt and Kyle Busch, and Jeff Gordon from NASCAR; Ryan Hunter-Reay and Josef Newgarden of IndyCar; Travis Pastrana of X Games fame; and Indy 500 champs Helio Castroneves and Juan-Pablo Montoya.

At the Press announcement Sweden’s Johan Kristoffersson, the 2020 FIA World Rallycross Champion and 2019 ROC Nations Cup Champion, became the first to test drive the first ever ROC Snow & Ice track. “It is so much fun driving around this ROC track, sliding the car through the wide corners. It will be a true challenge but I think all the drivers will love it,” Kristoffersson said. “Participating in Race Of Champions in Mexico in 2019 was one of the best experiences I’ve ever had and to now be able to do it here in my home country is going to be even more special.”

The Race Of Champions was the first big international motorsport event to introduce electric race cars with the Tesla Roadster at ROC Dusseldorf in 2010. The ROC event in Pite Havsbad event will feature a number of the latest and most exciting new electric race vehicles. Details of the equipment to be featured will be announced at a later date, but organizers expect a number of manufacturers and teams to use this race and its premier drivers to prove their latest innovations in EV technologies in a sub-zero environment.

"It is important that every motorsports series and event continue to look for ways to become environmentally responsible," said Fredrik Johnsson. "We expect ROC to be a carbon-neutral race in 2022 and are working toward that important milestone."

"Sustainable development and renewable energy has been a long term priority for Norrbotten since over 10 years. Limiting our carbon footprint is very important to us and at Pite Havsbad we're proud to use sustainable energy for up to 95% of your heat consumption." said Tobias Lindfors owner of Pite Havsbad Group.

As the COVID-19 crisis continues to impact live events of all kinds, Race Of Champions and Pite Havsbad have committed to organize the event in 2022 in safe conditions even if the Covid crisis is still not under control at the beginning of 2022.

“We are hoping to be able to welcome a large number of motorsport fans to the event, but are committed to holding the event even if the Covid crisis is still not under control at the beginning of 2022 and we have to do it without spectators,” said Kristofer Lundström, CEO and co-owner of Pite Havsbad Group. “We have over 200 very nice individual cottages for the participants and a plan in order to respect strict Covid protocols and safely organize the ROC event under any circumstances.”

Organizers and local officials will be providing updates through 2021 (visit raceofchampions.com), with regard to permitted live attendance, tickets and any restrictions affecting travel and local services.

It is so great that Race of Champions is now coming to Sweden. I think it's both cool and impressive when you look at the history, where it has competed in places like Barcelona, London and Paris and now in Piteå. It will be something new and different, both for the event and for the drivers. It is a wonderful environment around the event arena in Piteå. For us as an ASN, it will of course be one of the biggest events of the year. It will be really good, says Anna Nordkvist, CEO of Swedish Automobile Sport Federation.

Globally, there is no region in the world where so many players in the automotive industry gather in one place as in Arjeplog. With the international focus on our region's access to snow and ice, Piteå is an excellent choice for the event and enormous potential to expand the winter test offers and increase the development pace of global electromobility. That Race Of Champions is now establishing itself with an annual event in Piteå, shows that this is a natural step in a development journey which started back in the 70s to a broadening with more event-oriented activities.

If you take into consideration the event and the annual preparations as well as the fact that a lot is happening on the electromobility side for vehicle tests, that Northvolt is at the forefront of industrial excellence and that Hybrit also works with fossil-free steel, it is even clearer why our region has been recognized with awards as one of the most innovative in the world, continues Robert Granström, chairman of SPGA, Swedish proving ground association.

About Race Of Champions:
The Race Of Champions (ROC) is a defining contest in global motorsports. For 30 years it has given audiences and world champions a unique head-to-head showdown designed to level the playing field and crown the world's very best of the best. ROC draws on a diversity of disciplines from Formula 1®, IndyCar®, and other open-wheel leagues, to the grittier contests of NASCAR®, World RallyCross® and even MotoGP®, as it travels the world and exotic venues.

About Pite Havsbad:
– Pite Havsbad is northern Europe's largest facility for tourism and conferences. Whether you are looking for relaxation, entertainment, activities, enjoyment or rewarding meetings, you will find the opportunities here year round.

One of the most popular campsites of the year

Pite Havsbad is on the list when Hollistay presents the most popular campsites in Sweden. The fact that it is the campers themselves who have tipped about their favorites makes it a little extra fun with comments such as "Norrlands Riviera and a campsite that has it all" and "Fantastic beaches, restaurants, nice cabins for those who do not camp and entertainment".

Porsche joins the race car line-up with its spectacular 718 Cayman GT4 Clubsport and will also provide a fleet of electric vehicles for the drivers & VIP courtesy transport.